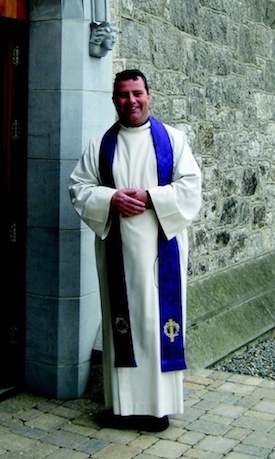 This Sunday, 28th July, is the first anniversary of the death of our much loved friend and Rector Revd Derek Sargent.

We’ll gather at the **10.30am Service** to remember Derek, to give thanks for the love and dedication he brought to his ministry among us, and to pray for his family and friends.

Derek was born in Dublin in 1966, and grew up in Dundrum. He went to school at Taney National School and Sandford Park. He studied theology at the Church of Ireland Theological College, Saint John’s College, Nottingham, Trinity College Dublin, and the Open University.

He was ordained deacon for the Waterford Group of Parishes in June 1999. After 2½ years as curate in the cathedral group, he was instituted as Vicar, with responsibility for the three parishes of Dunmore East, Annestown and Tramore. After a year and a half as vicar he became the Rector of Clontarf in 2003.

Derek was a dedicated servant of the Parish, and he is sadly missed by the Parish family and the wider Clontarf community.